Cindy Ono-Lam 1964 – 2013
"Though you are gone, your footprints will stay on our hearts"
She worked in advertising, and was promoted to Category Manager in GMHBC, was then promoted to Category Manager for Grocery. She worked her way through the categories and became one of the first national category managers for Safeway corporate.
When Safeway centralized, she became a Category Director and for the last 8 years managed one of the highest profile/highest dollar desks in the company.
Cindy married Wilson Lam in 1989 – Together, they have raised their two boys Geofferey and Zackery. The family kept busy through the years with Scouts, Sports, School and many other extracurricular activities. Geofferey is currently completing his Bachelor’s degree at Cal State East Bay and Zackery is a sophomore at Cal Poly Pomona.
Outside of work, Cindy was dedicated to her family and cherished her friendships. Her free time was filled with School and family projects and treasured celebrations with family and friends. She enjoyed travel including day trips, regular trips to Hawaii (with extended family) and Disneyland (a seeming addiction) and the welcome shopping associated with any and all activities. 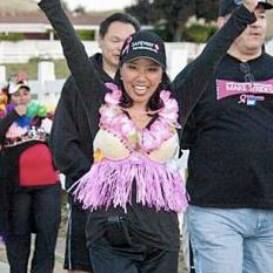 Safeway and Bras for the Cause have lost a beautiful woman to Breast Cancer.
Cindy Ono-Lam was diagnosed with breast cancer in 2008 and required additional treatments in 2010 and again in 2013. She was active with the Bras for the Cause breast cancer walk and many other charity fund raising events focused on battling breast cancer.
Cindy was born 9/23/64 in San Francisco and moved to the South Bay at an early age. She attended San Jose State and graduated with a B.S. in business with focus on Marketing/Advertising.
She began work at Safeway 25 years ago, following in her father’s footsteps. She worked briefly in the stores and quickly moved to the NorCal division office.